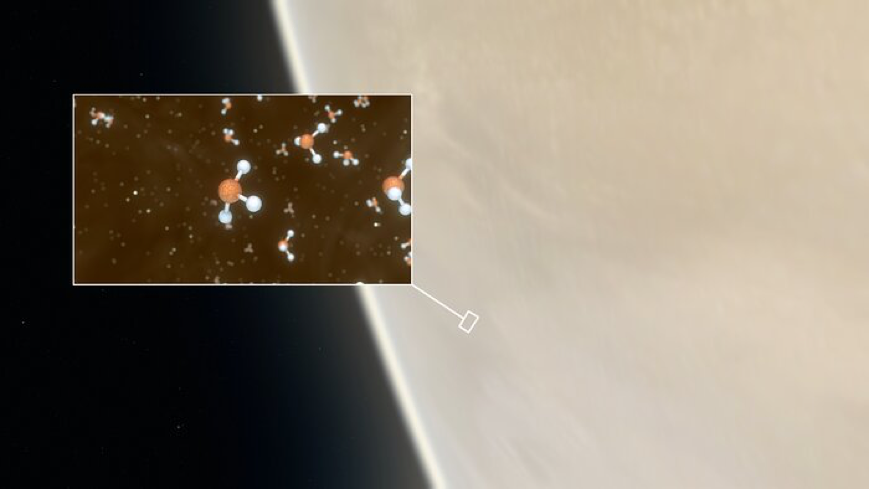 What has been discovered?

A molecule called phosphine has been detected in the atmosphere of Venus.

Why is it interesting?

The amount of phosphine that has been detected is relatively large. On Earth, phosphine can result from natural processes such as lightning and volcanic activity, but only in small amounts. The only known processes that produce phosphine on Earth in similar quantities are biological in origin.

Does that mean there is life on Venus?

No. What’s exciting is that this is the first detection of a possible sign of life for which we have no plausible alternative explanation. That doesn’t mean that there definitely is life, as we could be missing some other method of producing phosphine in the required amounts, but it’s a very exciting possibility which needs more investigation.

How was it detected?

Observations of the light passing through the atmosphere of Venus were made using the James Clerk Maxwell Telescope (JCMT) in Hawaii. Atoms and molecules absorb light at very specific and unique wavelengths, and the resulting ‘absorption spectra’ revealed a gap at the wavelength of phosphine. This implied that phosphine was present, and absorbing light as it passed through the atmosphere.

Are you sure it’s phosphine?

Yes – confirmation was obtained by making further observations with the Atacama Large Millimeter/submillimeter Array (ALMA) in Chile. This confirmed the initial detection, and no other known molecule can explain or mimic the observed features.

What else could have produced it?

Processes such as lightning or volcanic activity can produce small amounts of phosphine on Earth. The molecule can also be delivered by meteorites, or generated by exotic processes such as interaction with the solar wind. However these only produce very small amounts, far less than would be necessary to explain the observations.

Could it just be contamination from earlier probes to Venus?

A series of probes were sent to Venus during the 60s, 70s and 80s. Some of those launched probes into the atmosphere and even landed craft safely on the surface. The possibility of contamination is there, but it is highly unlikely they could produce the amount of phosphine we see in these observations. Very few organisms on Earth produce phosphine, and very few if any are capable of surviving in the extreme conditions in the Venusian cloud decks. This makes it highly unlikely that this is biological contamination from Earth.

What further research would be needed to confirm life or not?

The best way of doing this would be to directly detect the life itself. Ultimately this would involve re-visiting Venus with probes, which would make measurements in the planet’s atmosphere, and potentially bring back samples to Earth for further analysis.

Might there be similar signs of life on Mars or Mercury?

Could there be life on Jupiter?

Jupiter is very different since it is a gas giant planet whose atmosphere is dominated by hydrogen, rather than carbon dioxide. This makes life in the atmosphere of Jupiter highly unlikely. However the moons of Jupiter, such as Europa and Ganymede, have liquid water oceans beneath ice caps kilometers think, and so life there is more of a possibility.

What kind of life could exist on Venus?

Venus as a planet is inhospitable to humans. At the surface the high temperatures and high pressure would melt lead. The potential microbial life hypothesized by the paper to explain the phosphine is theorized to be located in more temperate clouds higher up in the atmosphere of Venus. In addition to this, any potential life will need to survive highly acidic environments – far more acidic than scientists have found life on Earth (those that can are known as extremophiles).