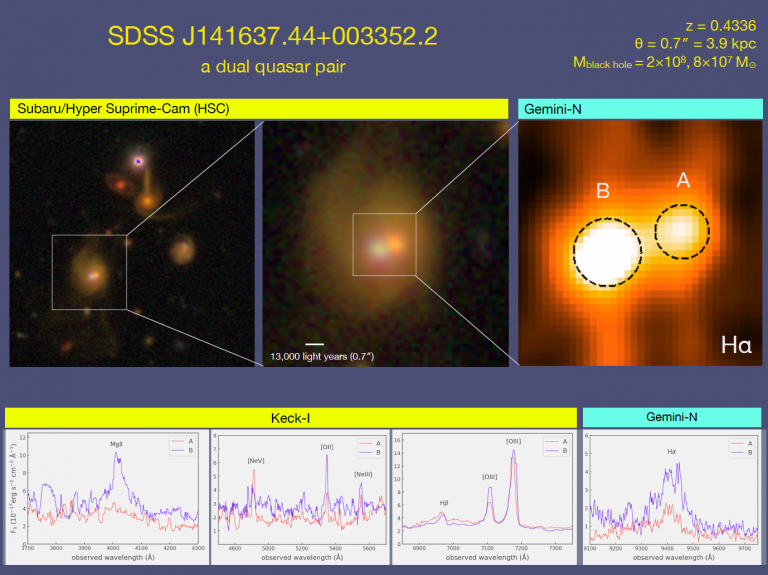 SDSS J141637.44+003352.2, a dual quasar at a distance for which the light reaching us was emitted 4.6 billion years ago. The two quasars are 13,000 light years apart on the sky, placing them near the center of a single massive galaxy that appears to be part of a group, as shown by the neighboring galaxies in the left panel. In the lower panels, optical spectroscopy has revealed broad emission lines associated with each of the two quasars, indicating that the gas is moving at thousands of kilometers per second in the vicinity of two distinct supermassive black holes. The two quasars are different colors, due to different amounts of dust in front of them. Credit: Silverman et al.

A combination of three Maunakea observatories (Keck, Subaru and Gemini) has been used by a team of Astronomers to discover several pairs of merging galaxies. In our dynamically evolving Universe, galaxies experience collisions and mergers with other neighbouring galaxies. These rare events can be dramatic, causing the birth of new stars and the rapid feeding of the supermassive black holes that reside at the centre of each galaxy.  As material swirls around these black holes (which may be billions of times more massive than our Sun), it is heated to high temperatures, and becomes incredibly bright. So bright, in fact, that it can outshine its host galaxy, making a merging pair of galaxies with active black holes extraordinarily hard to detect. However, the combination of observations from Keck, Gemini, and Subaru, allowed the researchers to overcome these difficulties by pinpointing objects where gas was moving at thousands of kilometers per second, and thus must be under the influence of a supermassive black hole. These cosmic dances between two merging galaxies provide unprecedented insight into how galaxies form and grow.